Nordic Women on Boards and in Leadership

Nordic Countries and the Secret to Gender Equality

Nordic countries lead the world at closing the gender gap and, in recent years, have taken root at the top of the global rankings. But why are these nations so far ahead of others?

According to the OECD, almost three in four working-age women in Nordic countries are part of the paid labour force, and policy-makers explicitly support gender equality at work, at home and in public, with both parents eligible for maternity/paternity leave which is known as “Parent leave” within the Nordic countries.  Free childcare, no school fees, free school meals, free after schools activities and free Universities are amongst a Nordic ethos that policy makers embrace to enable both parents in a family to work, and in particular, for women to be able to pursue a career.

Nordic countries all benefit from a developed welfare state and foster forward-thinking initiatives, which support women joining, or returning to, the workplace. 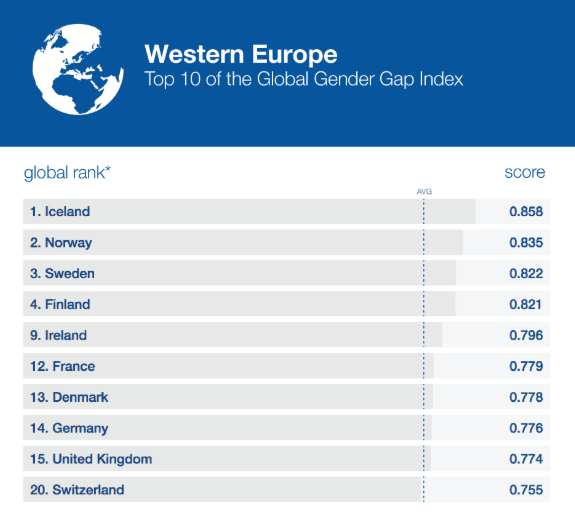 Iceland maintains its superiority as the world’s most gender-equal society, a position it has now held for a decade.

The island nation has a culture of political empowerment and boasts many strong female role models. Female empowerment emerged from the strong political feminism movement of the 1970s and has permeated every aspect of Icelandic society.

Progressive childcare policies mean that women in Iceland aren’t faced with a choice between work or raising children. Universal childcare and generous parental leave policies - women and men both get 90 days leave - help to remove the burden of child-rearing from mothers.

When it comes to closing the gender pay gap, Iceland ranks No 1 for ‘Wage equality for similar work’.

Norway has closed more than 83% of its overall gender gap and continues to make steady progress.

Supportive parenting policies and heavily subsidised childcare provision have led to a high percentage of women entering the workforce. Since 2013, mothers and fathers have been obliged to take at least 14 weeks employment leave following the birth of a child.

Norway enjoys a near-even distribution of male and female workers, with many women in positions of power.

Gender quotas legislate for a 40% female presence in the country’s parliament and on business boards, resulting in a strong female presence – Norway’s prime minister, minister of finance and minister of foreign affairs are all female, while women make up 41% of the C-suite.

Sweden has the most generous parental leave policy in the world, with parents entitled to share 480 days - or around 16 months - paid leave following the birth or adoption of a child. This is just one of the initiatives that have helped the nation close 82% of its gender gap.

In recent years, Sweden has seen an increase in female legislators and bolstered numbers of senior officials and managers. In 2016, the number of Swedish women equalled males in ministerial positions for the first time and it ranks No 1 in the index for this.

Finland has the fourth greatest gender equality of any nation, with 82% of its overall gap closed. It is the only top-ranked Nordic nation to fully close the gender gap in educational attainment.

The nation played a pioneering role in bringing about gender equality, becoming the second country to grant women the right to vote and, in 1906, was the first to award women full political rights.

Women make up 42% of Finland’s parliament and 38.5% of ministers, which accounts for the nation’s strong political empowerment rating. The incumbent Prime Minister is Sanna Marin of the Social Democratic Party. Marin was sworn in on 10 December 2019 and at 34, she became the world's youngest serving state leader and the youngest Prime Minister in Finland's history.

The Nordic region has experienced an accelerated pace of change in board diversity over the past 10 years. Today, it is estimated that 35 per cent of board members on public limited boards in the largest Nordic companies are women (Spencer Stuart, 2015; European Commission, 2016c).

This is in contrast to the global perspective where only 12 per cent of company boardroom seats are kept warm by women (Deloitte, 2015). Europe is doing slightly better—while the Nordic countries (and others such as France and Italy) are taking the lead on diversity on boards.

Better Recruitment for the Best Talent

One red thread throughout the different Nordic countries’ efforts to ensure gender diversity has been the focus on recruitment and selection processes for top-level jobs. The 2008 economic crisis pointed to the different management styles of women and men. “Had the Lehman Brothers been the Lehman Sisters, the company would not have gone under” is one oft-quoted statement suggesting this. One study posited that characteristics often attributed to women, such as being in possession of soft skills and adopting inclusive approaches may benefit women. Whereas these skills were not viewed as strong management ideals a few decades ago, they are increasingly valued today (Helgesen, 2014). Other studies argue that there seems to be a gap between the views of women and men in senior positions as to how important and effective the recruitment process is for achieving gender diversity on boards and in management positions. It will also help that as the ever growing pool of well educated Nordic women gain more relevant experience the more they will gravitate towards these positions in the future, which will increase the talent pool and make it possibly even more difficult for the currently male-dominated corporate universe to deny (Iceland Ministry of Welfare, 2016).

It is Prime Nordic’s view that that gender diversity is not just the right thing to do, but also the smart thing to do by being inherently good for business: not just in terms of profit, but also as an emergent necessity for enterprises to thrive and grow. Gender diversity drives transparency, fairness, and innovation and ensures that companies or organisations bear their social responsibility.